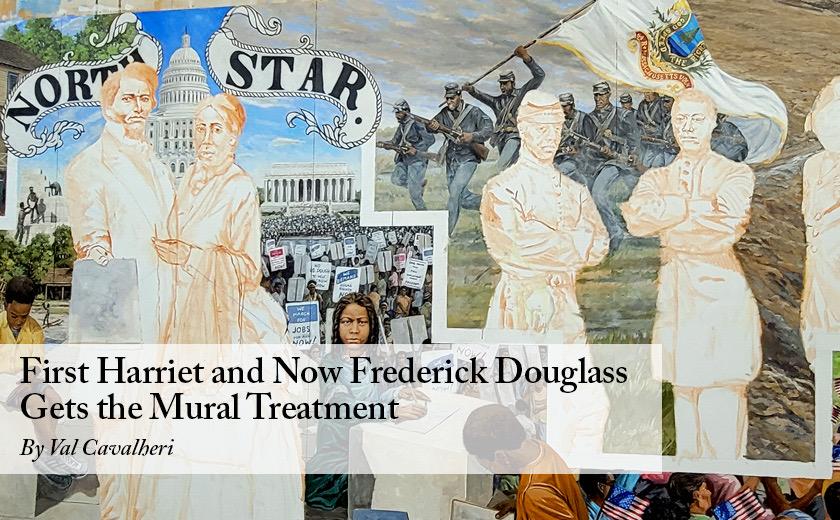 This is a story about a collaboration of passions. On one side is Tarence Bailey, 5x great-nephew of Frederick Douglass, who has a compelling story to tell about family, hope, and freedom. On the other is Michael Rosato, muralist/artist known worldwide for his ability to tell a forceful story in a painting. This is a story about when the two got together.

Their partnership happened accidentally. It was 2019, and a friend of the Bailey family, Michelle Garcia-Daniels, came down for a visit. Garcia-Daniels, a social and political activist from Rochester, NY, asked for a tour of the Eastern Shore.

“We took her to see Harriet Tubman’s birthplace,” said Bailey, “and then went to the visitor’s center and the Tubman mural in Cambridge. We stopped by the Hill, the neighborhood where I grew up. I mentioned to her how I had always wanted a mural on the Hill. She said, ‘Well if you get that guy from Cambridge to do it, I’ll pay for it.’”

‘That guy from Cambridge,’ was, of course, Michael Rosato of the famous Harriet Tubman Take My Hand mural. That mural has been credited for altering Maryland’s tourist scene and attracting thousands of people to the town of Cambridge, even during the pandemic. There was a reason –the mural touched them.  Rosato remembers it happening even as he painted. “People would come up and ask questions, and once you tell them a good story, they’re changed by that story.”

That mural got a lot of press, and suddenly, there was a renewed interest in Harriet Tubman. Could Rosato do the same for Frederick Douglass, Easton’s most famous native son? Could he do the same for Easton?

Bailey reached out, and Rosato enthusiastically agreed to be part of the project, that is until COVID forced everyone to go on a hiatus. In January ‘out-of-the-blue,’ Bailey received a call from Garcia-Daniels, “Tarence,” she told him, “I’m sending you the money.”

So, what goes into creating a work of art? In this case, it was history. And it became more than the history of one man. It touched on the history of a generation of people.

“There were many discussions with Tarence,” Rosato said. “To hear him talk about Frederick Douglass is completely different than to hear somebody else that is a scholar of Frederick Douglass speaks of him. Tarence spoke about family history, and the painting started to define itself. It’s unique, in a design sense, in that it’s Frederick Douglass’ story, but it’s also the family tree, the roots that he set into the ground that have sprung. And so, you have other ancillary stories being told, not necessarily that Frederick was involved in, but ones he was influenced by.”

That influence weaves throughout the mural and tells that story, both heartbreaking and optimistic, of a journey from slavery to the White House. Rosato sees it as more than that. “It’s also a legacy mural,” he says, “It’s an American story, just like with the Daughters of the American Revolution, that same lineage and that same story can be told of the African American journey. And it not only talks about the beginning, but it also talks about the now, and what’s to come.”

And what’s to come is as important to Bailey as what has been accomplished. In particular, he asks us to consider two men he thinks we should know more about. You’ll find them on the right side of the mural, and they are the two sons of Frederick: Lewis Henry Douglass and Charles Remond Douglass. Both men served with the 54th Massachusetts Infantry Regiment. Lewis was the first African-American Sergeant Major in US history, and Charles was the first African American to enlist for service during the Civil War. Says Bailey, “Lewis was not even given an honorable discharge because he had to pick between a pension or honorable discharge. So, he took the pension.”  After over 150 years, this summer, both men will be disinterred from Harmony Cemetery in PG County and buried at Arlington National Cemetery with full military honors.

Stories such as these are important to both Bailey and Rosato. For Bailey, it is a hope that Douglass’ words touch a new generation.  “People are looking back at my uncle, and looking at his words, and they’re saying, how much of a conscience he was of the nation. He called out the hypocrisy. He called out the wrongs. And not just when it came to African-Americans; he was for all people.”

To Rosato, Douglass’ life is a chance for him to tell these narratives in the best way he knows how. “The painting is very realistic with a lot of dimension to it. It’s made up of several scenes, and there is a story in each scene.” Unlike his Tubman painting, this 24 by 8-foot mural is being painted indoors, so he has less of an opportunity to see what effect it’s having on people. But those who have seen it have been moved by its message.

And just like with the Tubman mural, there is a sense that you, the viewer, are being offered something. Instead of a hand asking you to follow her to freedom, Douglass holds out a book and asks you to ‘read his words.’

It’s not surprising that as inspiration, while Rosato painted the mural, he listened to Douglass’ autobiography and his famous 4th of July speech. “I got a really good sense of who he was, and so certain scenes took on a greater significance,” he said. “When you’re told about what it was like being enslaved and having children being taken from their families, mothers being sold, and men being beaten… when you paint those things, you start to really feel how important telling these stories are, and how you can’t shy away from the fact that people were offloaded on boats on chains and eventually sold.”

The mural is expected to be completed this summer, where it will be placed in the Hill Community, one of the oldest African American neighborhoods still in existence. For now, Bailey is raising funds for this project, known as Operation Frederick Douglass on the Hill. The money will cover the permits, insurance, landscaping, lighting, snow removal, etc. “Then there is the unveiling,” says Bailey. “There are assembly permits and insurance. We plan on having people come to perform; we should at least be able to cover their travel.”

The hope for everyone involved in the project is that the mural allows us to continue the conversations about race, equality, and justice. Like Bailey, we’ll come to see that Douglass’ words do transcend time, and they are as powerful today as the day he spoke them.

We have to do with the past only as we can make it useful to the present and the future. —Frederick Douglass

For more about Operation Frederick Douglass on the Hill, go here. Donations can be made to the Mid-Shore Community Foundation, Douglass Mural Project Fund