In 2019, when transportation planners were studying more than a dozen potential locations for a new Chesapeake Bay crossing, Gov. Lawrence J. Hogan Jr. made headlines when he declared there was only one option he would embrace.

“There is only one option I will ever accept: adding a third span to our existing Bay Bridge,” tweeted Hogan, brushing aside the 14 official “corridor” options which stretched the entire length of the bay. “While the federal process requires multiple proposals, the data is indisputable — this option would maximize congestion relief & minimize environmental impact.”

Over the course of the last few months, however, officials from 12 of Maryland’s 23 counties have quietly embraced a new concept for easing congestion at the Bay Bridge: a new span, with eight or more lanes, to replace the existing spans.

The 12 counties, along with summer destination Ocean City, have passed resolutions or sent letters of support for the concept. Some jurisdictions have directed their letters to Hogan (R) and/or transportation secretary James F. Ports Jr. Others have sent letters of support directly to the Queen Anne’s County Commission, where the idea appears to have originated.

The letters of support are short — typically one page — and strike similar themes.

“Due to the numerous commuters who use this bridge and the lack of alternative routes, periods of congestion have resulted in major delays despite the rerouting of traffic,” wrote Dorchester County Council President Jay L. Newcomb (D). “This is particularly troubling since it provides vital access for emergency services, patient transports and fire response as well as to medical care, residents’ places of employment and the homes of their family and friends.”

Queen Anne’s Commission Chair James Moran (R) said he and his colleagues have made a concerted push to get local leaders to back the replacement bridge concept. He said the current congestion on and near the span, which impacts communities closest the bridge disproportionately, will only get worse as the Eastern Shore grows.

“We’re asking for an eight-lane crossing,” he said. “That’s why we’ve been lobbying all the other counties, because a project of this magnitude is going to take everybody being on board.”

Last week the Federal Highway Administration embraced the state’s preliminary conclusion that a new crossing in the general vicinity of the existing bridge would draw more traffic away from the current spans than other locations that were studied.

That finding clears the way for a second study that would consider where — within a two-mile “corridor” — a new bridge should go. A “Tier 2” study would cost approximately $40 million, officials have said. The state has yet to commit the funding, though Maryland has a massive surplus and Hogan has indicated that moving forward on a new crossing is a top priority.

The term-limited executive is set to leave office in January.

Sen. Stephen S. Hershey Jr. (R-Upper Shore) said replacing the current spans with a single eight-lane bridge makes the most fiscal sense. “I don’t see a scenario where all three remain there. I think that’s not cost-effective,” he said. “I think you have to build something that can accommodate everything, without the cost of maintaining the other two.”

Moran has urged Hogan to fund the next second study immediately, as it would tackle the environmental and design considerations needed to move forward with construction. “Phase 2 of the [National Environmental Policy Act process] will tell you if, in fact, one bridge comes down, or two bridges come down,” he said. “But it is our understanding that one of those bridges will come down for sure — if not both.” 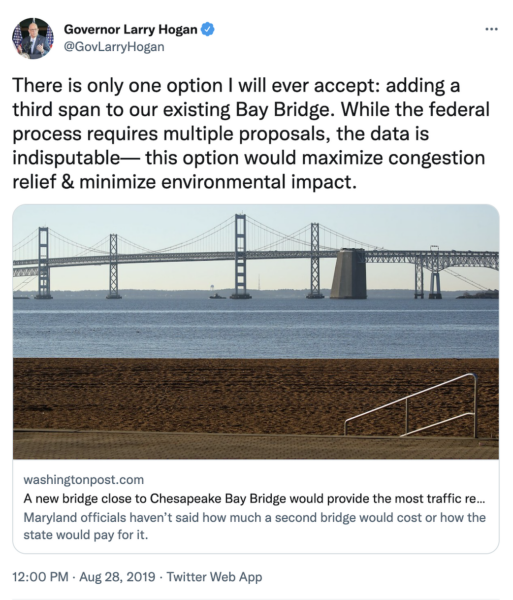 At the Maryland Transportation Authority’s monthly meeting on Thursday, Ports criticized the media for advancing a “false narrative” that Maryland was pursing a third span — what Hogan called the “only … option I will ever accept” in 2019.

“That’s something that’s never come from this organization,” he said. “It came from whomever and the press. But I want to make it clear that that has never come from us. We are not in a position to determine that at this time.”

In a subsequent interview, Ports stressed that, under federal rules, the state cannot pre-determine the best option for any project. “I cannot talk about what the bridge might look like,” he said. “I can’t say that because of the NEPA process. I can’t drive that narrative.”

Ports said persistent reports of a “third span” near the Bay Bridge have caused residents of nearby neighborhoods to “get really, really upset.” He said he and the authority’s executive director, Will Pines, “worked very hard with all of the communities, especially Anne Arundel County and Queen Anne’s County, on trying to get these resolutions from the counties to support this effort.”

Although most of the focus has been on the size and location of the new span, Pines told the authority’s board that planners are focusing on improving mobility in the entire 22-mile corridor that runs from the Severn River to the U.S. 301/50 split.

The study, he stressed, “included both on-land and over-water improvements.”

“This is not just a bridge study,” he added. “It also includes the entire corridor lanes of highway improvements as well.”

Pines said the first study’s selection of “Corridor 7,” the area around the current bridge, does not lock the state in to a third span. A single replacement bridge, he said, would remain a “viable” option.